Two big fights on Channel 7 on Sunday 3rd May 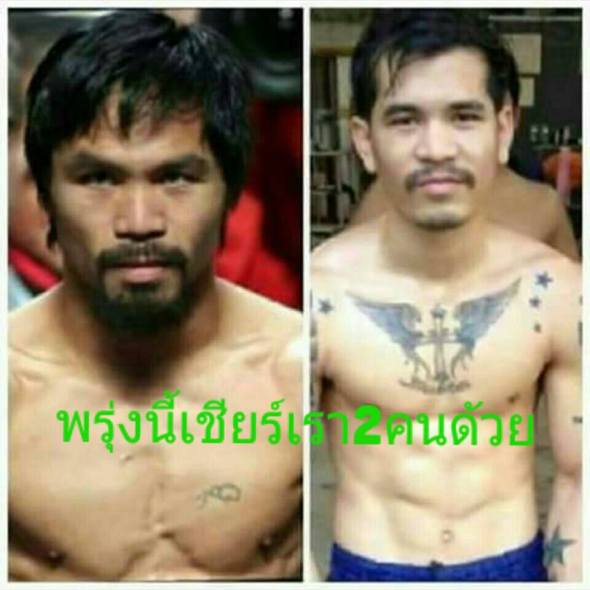 Sunday 3rd May will be a big day for fights in Thailand, broadcast on Channel 7, with a highly anticipated international boxing bout in the morning and a championship bout in the main event of the afternoon Muay Thai 7 See program.

Unless you’ve been living under a stone for the past few weeks, it won’t have escaped your attention that Manny Pacquiao and Floyd Mayweather Jr finally go head to head in Las Vegas—for the WBC, WBO and WBA welterweight titles—with the fight reaching Thai screens at approximately 10am.

At last night’s weigh in, both fighters looked in fantastic shape, with Floyd weighing in 1lb heavier—at 146lb to Manny’s 145lb. Manny seemed to have the overwhelming support of the crowd; however, many people say the smart money is on Floyd for a defensive points win.

This fight may be happening past both men’s prime, but has broken records for ticket sales and whipped up fervour like no boxing fight has for some years. I’m certainly very excited about it and will be heading to a pub in the morning to watch it on a big screen with friends.

The fight was originally a non-title bout, and later switched to a defence of the title that Jomhod won against Wanchalong PK Saenchaimuaythaigym last November, and defended against Sprinter Paengkongprab in early March.

I’ve only watched Saknarinnoi live on one occasion and remember him as tall and lean, and strong with his knees. Jomhod is more of an all-round fighter, and unusually strong with his hands. It will certainly be an interesting match-up and I’ll be heading to the stadium to watch it; and, of course, hoping the belt stays round Jomhod’s waist.

According to the Muay Thai 7 See Facebook page, coverage of Pacquiao vs. Mayweather Jr starts on Channel 7 at 9.05am (the fighters are expected to walk to the ring at 10am), while the Muay Thai 7 See show starts at 1pm. However, these start times could be subject to change, knowing the unpredictable nature of boxing fights and Thai TV coverage.

Wordless Wednesday: 10 kicks by Neungthep Eminent Air »
« Does this description fit you too?