July’s WBC bantamweight boxing fight between Thailand’s Usanakorn Kokietgym and Australia’s Susie Ramadan in Melbourne, Australia was a subject of controversy after media speculation concerning Usanakorn’s gender. Australian newspaper The Age reported that she was detected with 3 times the normal level of testosterone for a woman and refused comprehensive blood testing to prove her female status. According to the article, a ringside doctor proposed several potential causes of her elevated testosterone levels, including use of anabolic steroids, hermaphroditism (having male and female sexual characteristics), and her being born male and taking female hormones. Although Usanakorn went on to lose the fight, Susie’s trainer was quoted as saying that Usanakorn punched “harder than most blokes I know”.

In combat sports—such as boxing and Muay Thai—hormones can have a major influence on performance. Testosterone is the principal male sex hormone and occurs in men and women in different amounts: men typically have plasma testosterone concentrations 7-8 times those of women. Additional to its effects on male sex characteristics, testosterone promotes protein synthesis, serving to increase muscle mass and strength, and increase bone density and maturation. Anabolic steroids mimic the effects of testosterone and can therefore promote muscle development, increase endurance, and accelerate repair. Although banned in sports, it is well-known that they can be purchased in certain pharmacies in Thailand and their use is not widely regulated in Muay Thai.

However, medical conditions do exist in which women naturally display increased levels of male hormones including testosterone. One such condition is polycystic ovary syndrome (PCOS). PCOS affects 5-10% of women of reproductive age and is associated with irregular or absent periods, infertility, acne, excess hair on the face and body, and obesity. It is thought to have a genetic cause and has no cure, but can be controlled through weight loss and dietary control (in particular, avoiding simple carbohydrates such as white bread and white rice), regular exercise, and taking forms of the contraceptive pill that block the effects of male hormones.

I was diagnosed with PCOS shortly before taking up Muay Thai. My main reason for trying out the sport was to lose weight—I was heavier than 70kg at the time. Women with PCOS tend to gain weight easily and struggle to lose weight because of resistance to the hormone insulin, which prevents the normal breakdown of sugars leading to their storage as fat. Prior to taking up Muay Thai I had not enjoyed sports, but from the first session I felt I had finally found an activity that worked for my body. I loved the feeling I got from training: the rush of endorphins and release of aggression—my heart pounding, muscles burning, and sweat pouring off my body. As my fitness increased, so did the intensity and regularity with which I trained. Over the years the weight came off—at my lightest I was walking around at less than 54kg—and my body shape changed as muscles developed.

Some time ago, I was interested to read an article on the BBC website. It described the research of a Swedish scientist, Dr Magnus Hagmar, who suggested that PCOS might contribute to the sporting successes of some female athletes. It is common for female athletes to suffer from irregular or absent periods, caused by intensive training regimes and strictly controlled diets. Dr Hagmar proposed PCOS as the cause of menstrual irregularity in many of these women (without them necessarily displaying its other associated symptoms) and suggested that increases in testosterone levels associated with the condition might offer a significant competitive advantage in certain “power” sports.

He said, “What we’re dealing with is just a tiny increase in levels, which can make it easier for the women to build muscle mass and absorb oxygen. This means that they might have got quicker results from their training and therefore been encouraged to train harder and more often.” In his study, he had evaluated a group of elite Olympic athletes, comparing them with women from the general population, and observed that 37% of the athletes had polycystic ovaries compared with 20% of the non-athletes. He also observed that polycystic ovaries were more common in the women who competed in power sports such as ice hockey and wrestling than in those who played technical sports such as archery and curling. Dr Hagmar stressed that his results were not connected to doping and that all of the athletes had tested negative for performance-enhancing drugs. 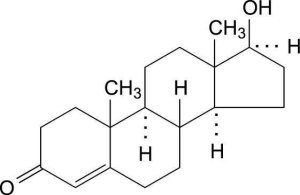 Friend or foe? The chemical structure of testosterone. Image source: The Washington Times.

After reading the article I wondered how many other female Muay Thai fighters are—like myself—women with PCOS. Although it has technical elements, Muay Thai is similar to ice hockey and wrestling in being a sport that requires powerful bursts of force. Is it, therefore, possible that minor increases in testosterone levels caused by PCOS could have positive effects on training or in the ring? I was often told I used to train as hard as the men at my gym. Did testosterone give me that extra drive to train harder? Would I have become so addicted to Muay Thai without the influence of male hormones?

It would be interesting to learn the percentage of female boxers who suffer from menstrual irregularity as a result of the physical stresses of training and making weight for fights, and to identify the proportion affected by polycystic ovaries. If Dr Magnar’s theory on PCOS contributing to sporting success is accurate, does a relatively high percentage of female Muay Thai champions have PCOS? I am also interested in hearing from other women who were aware of having PCOS before taking up Muay Thai and similarly became addicted to training. The effects of hormones on mood and certain personality traits have been well-documented. Do our hormones govern our behaviours to the extent that they influence the sports we are drawn to?

19 thoughts on “Hormones and Muay Thai”