Social Mobility and The One-Handed Fighter

In Thailand, Muay Thai has traditionally been considered a sport of the lower classes. Its boxers tend to come from more rural farming regions, with fighting a means for young boys to earn money and—if they go on to excel at the sport—potentially secure income that far exceeds what would otherwise typically be available to them.

Despite some recent changes in trends (for example, over the last year or so I’ve noticed increasing numbers of more middle-class Thais and university students joining my gym in Bangkok), this stereotype does seem to prevail.

These photographs portray life in a gym in Isaan (Northeastern Thailand)—the area from which the largest percentage of Thailand’s Muay Thai fighters hail—while Abigail (who has been based in the country for several years) shares her knowledge on sociocultural trends within Muay Thai.

The boxer shown kicking the pads in the closing scenes is my Eminent Air Boxing Gym team mate Bpragaipetch Sagami (nicknamed Dtang). Dtang’s story is remarkable. He was born without a left hand though this deficit hasn’t prevented him from pursuing his dreams of being a boxer and achieving relative success in his chosen career. Dtang has competed against some of the top ranking Thais at his weight and most recently scored an impressive win against Yothin Sakaethongresort at Lumpini Boxing Stadium on 5th March (watch the fight here). 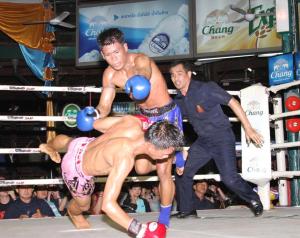 Becoming quite the star of screen, Dtang featured in two other documentaries last year. One was “Fight Club Asia”—a 3D documentary first screened by National Geographic Channel Asia in July 2012.

The other was “The One-Handed Fighter”—a short film produced by a group of media students, one of whom—Sasin Soonthornpusit—trains at Eminent Air in his spare time.

“The One-Handed Fighter” is a charming piece of film that captures Dtang’s warm and modest personality. In it, he describes his beginnings in Muay Thai, recounts tales of teasing and bullying, and firmly states his sporting ambitions. His interview scenes are interlaced with footage at Eminent Air and at Lumpini, providing the viewer with glimpses of gym life and the stadium environment.

Dtang’s story provides a fitting example of social mobility through Muay Thai. In the past, he has mentioned that he feels being a boxer brings him respect from others and an income that probably wouldn’t be attainable if he worked a regular job. If he hadn’t become a Muay Thai fighter, what options would have been available to him?

“Social Mobility” and “The One-Handed Fighter” are two excellent documentaries, linked by one common character. Both provide insights into sociocultural aspects of Muay Thai, as well as highlight the talents of one extraordinary individual. Figuratively, Dtang has probably had to fight more than most to be where he is today and has shown determination throughout. His standout statement from “The One-Handed Fighter” is one that cannot fail to inspire.

2 thoughts on “Social Mobility and The One-Handed Fighter”