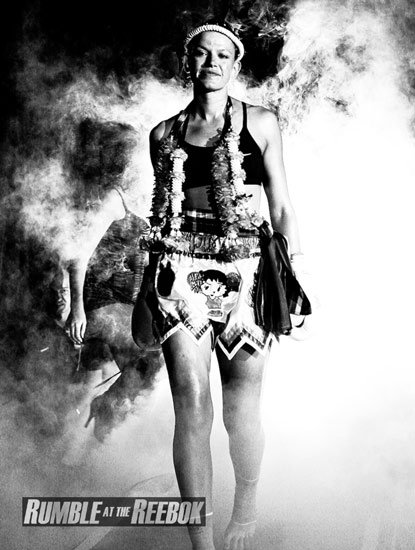 Sheree Halliday—on caring for kids, competing, and being voted a boxing babe.

Sheree Halliday has two sides: nurturing nanny and tough Muay Thai fighter. Although her Muay Thai fighting side has been away from the ring for over a year, she is about to step back into the limelight when Sheree (representing Keddle’s Gym, UK) takes on Elna Nilsson (Real Fighter, Sweden) in an A class bout in London, UK on 20th October.

During this (my first) interview for Muay Thai on the Brain, I asked Sheree a few questions on her busy life as nanny, Muay Thai fighter and teacher, her plans for the future, and what her employers think about her out of work activities.

At what age did you start training in Muay Thai and what prompted you to first try it out?

I’d just turned 19 when I first started training. I’d previously gone to watch a friend’s brother in a kickboxing competition and secretly thought I’d love to give it a go but didn’t think I’d be able to. Coordination wasn’t my thing! My younger brother was learning karate at a local leisure centre. I used to take him and noticed on the timetable they had Thai boxing as well—I had no idea what it was! For about a month, whilst my brother was doing karate, I’d watch through the sports hall door thinking I’d love to give it a go. I managed to persuade a friend to join me—she lasted about a month!

You used to compete in athletics as a teenager. Which events? Do you think your athletics background has helped your Muay Thai career?

I’ve always been very sporty—competing for all my school teams in netball, basketball, cross country and athletics. I was also a member of Woking Athletics Club and competed in the 600m, 800m, and cross country events. I was U13 Surrey champion for 600m. Athletics has definitely benefited both my Muay Thai training and fighting. Having been competitive from an early age I learned how dedicated you need to be to succeed in a sport—the more dedicated you become the more you want to succeed. It gave me an understanding of health and fitness and also how to deal with nerves before an event.

How many fights have you had altogether and what titles have you won?

What would you say is your greatest achievement in Muay Thai?

This is a really hard one. I feel my whole fighting career has been an achievement. I’ve have all around the world, won titles, represented my country at the amateurs—it’s been amazing! If I had to choose one maybe it would be winning my WPKL British title against Bonny Van Oortmerson. I’d spent 5 months in Thailand—that was my first fight when I came back and one of my best performances to date. 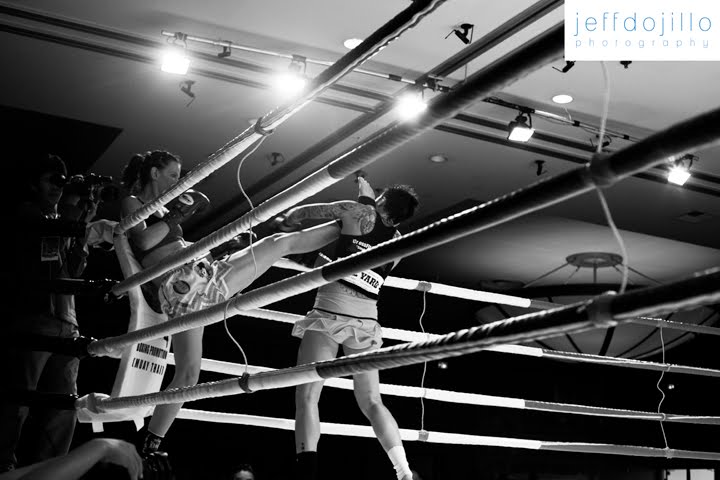 What was the toughest fight you had?

I think I’d have to say my fight against Roxy “Balboa” Richardson in LA, USA. She’s a tough girl. The fight was A class but with only 1 minute’s rest between rounds. It was non-stop from the first bell.

It sounds like Roxy would agree it was a tough fight. She is quoted as saying that your fight with her was “an all out war from bell to bell for all five rounds”.

This is the first time I’ve heard this! It’s put a big smile on my face. It was a tough fight!

You lost that bout on a split decision but there was some controversy over the result. How do you feel knowing that Roxy has retired and you will never get that rematch you wanted so badly?

In my opinion (and the opinions of many others) I won the fight. I was so gutted when the decision was announced. I put everything into that fight—the best I’ve ever fought. A rematch was asked for but I was told it was refused. Knowing now that Roxy has retired I’m a bit gutted I won’t get chance to settle the score. 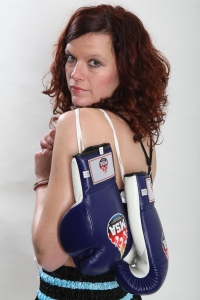 In 2007 you won the Muay Thai Online British Muay Thai Award for Best Looking Female Fighter. How did that make you feel? (Pretty chuffed I would imagine!)

Haha! Over the moon!

Do you find it hard juggling your job as a nanny with fight training? What does the family you work for think about you fighting?

It is really hard trying to juggle work and training for a professional fight. It’s hard enough training full-time let alone having to work as well. Up for early morning runs, long day at work, and then late training sessions take their toll. Some people think nannying is an easy job—it may be physically but mentally and emotionally it can be so tiring, especially looking after 2-year-old twin boys. I am very lucky and work for a lovely family who are always flexible if I need to take a holiday for fights. I think they think I am slightly mad doing the sport I have chosen, especially the whole cutting weight thing!

You trained for some time in Thailand. How long did you spend there in total and which gyms did you train at?

I had two stints in Thailand—one lasted for 5 months and the other 6 months. I trained at Siam No. 1 in Chiang Mai but only for a short time—about 2 weeks. Then it was off to Bangkok, where I found my second home—WPT Gym.

What did you like best about training in Thailand? Was there anything you didn’t like or any bad experiences?

I was a bit worried about going to train in Thailand as I’d heard lots of stories of how girls can be treated in the gym, about touristy gyms where the Thais aren’t really interested in teaching you (they just hold pads and tell you you’re great), and fights where people are paid to lose. But I was lucky enough to have WPT Gym recommended by Tony Myers. He spoke to Pimu (the owner of WPT Gym), who was happy to have me. I feel so lucky to have gone to this gym—I was taken seriously as a female fighter and was given the same training opportunities as everyone else. Sparring and clinch work with the Thais was also allowed. (In some gyms in Thailand women are not allowed to train in the same ring as male Thai fighters, or to spar or clinch with them.)

The great thing about training in Thailand at WPT was training with Pimu. The first time I went it was like starting a new sport. Learning foot work, positioning, timing…..everything was broken down step by step. I loved the intensity of the training, the heat, the people, and the culture. The only thing I would say I didn’t like was training with injury. If you stop you’re considered lazy or weak, so you develop the fighters’ mentality of train through it!

Your fight on 20th October will be your first in over a year. Why did you take so much time out?

I know—a whole year out. Mainly due to an untreated injury from my trip to Thailand in 2011.

What do you know about your opponent (Elna Nilsson)?

I’ve been told she is a Swedish champion and that we have similar fight records. I haven’t done too much research on her—sometimes I prefer not knowing. Some of her fights are on YouTube. She seems to have a nice Thai style and has trained at Sinbi Muay Thai in Phuket.

Are you still teaching a women’s class? Would you like to have your own gym/fighters in the future?

At present I’m not teaching the women’s class due to a few problems with the studio. I would love to start teaching again, but it’s difficult to find time with working and training at the moment. I had great feedback from the previous classes so need to get started again soon. My own gym and fighters would be amazing—so would winning the lottery! Maybe one day when my fighting career comes to a stop I would love the opportunity to pass on my knowledge. According to my dad I’m getting a bit too old for this anyway!

What’s next for Sheree Halliday?

Who knows?! I’ve been asked to fight in London in December, but it hasn’t been confirmed yet. I would love to visit Thailand again soon—I miss the land of smiles. I would also love the opportunity to fight for a world title, and to fight on one of the big shows in Thailand—King or Queen’s Birthday—it would be amazing. More teaching would also be on my list of to do’s!

With beauty and brawn in equal measure, positivity and charisma, Sheree Halliday is a great representative for women’s Muay Thai. Please show your support for her return to the ring on 20th October. And watch out for more of Sheree in the future—expect more good things to come from this boxing nanny.