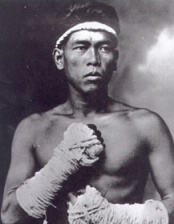 My gym was to be represented on the day by former Lumpinee and Channel 7 Boxing Stadium champion Tapaothong Eminent Air—a veteran of more than 300 fights, though absent from the ring for close to two years. 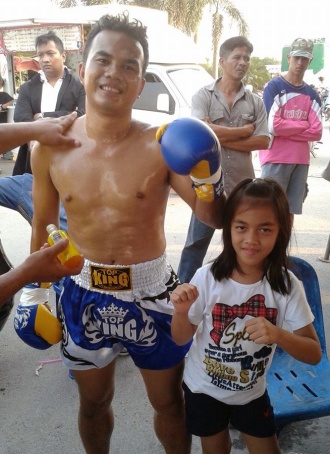 With close to 25 years of Muay Thai experience, Tapaothong’s skills are exceptional. However, it’s probably not unfair to say that his stamina is slightly less than exceptional, having been out of training for some time until the weeks preceding the bout. Fortunately for him, the fight had been scheduled for only three rounds.

We initially assumed Tapaothong would be matched against a “farang” (foreign) boxer. It later transpired Tapaothong had been matched to fight a Thai. And a prisoner to boot. 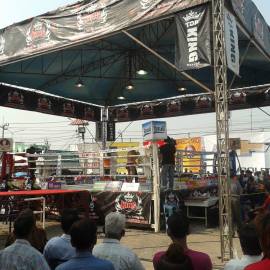 When I arrived at the venue, the show was already underway, with Jos and Alex in the ring trading heavy elbows. Tapaothong, his wife and two daughters, and trainer Fahlaep were sat watching the action a few metres from the VIP stage.

After a few minutes, gym boss Mr. Somboon approached, speaking animatedly on the subject of Tapaothong’s comeback. After hearing him mention Khlong Prem prison several times, I asked Mr. Somboon if it was true that Tapaothong would be fighting a “nak toht” (prisoner).

We all laughed, including Tapaothong. Although it was not the typical pep talk you would expect to hear from a manager to a fighter before a bout, the conversation, and Tapaothong’s reaction, emphasized one of the traits I like most about the Thais in that they don’t take life—or the fight game—too seriously (unless there are large amounts of cash involved, of course). 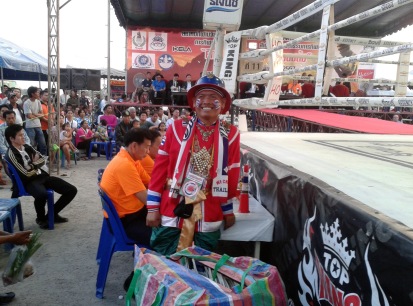 Despite his not so prime fitness and potential demise at the hands of the convict, Tapaothong remained as cool as a cucumber. Such composure is, I suppose, what you might expect after hundreds of fights to your record and having traded leather with the likes of Pinsiam Sor Amnuaysirichok, Rungravee Sasiprapa, Yetkin Ozkul and even Pornsanae Sitmonchai many years ago.

By that stage in the show, Jos Ingram Gym had beaten Alex Chiangmai Muaythai on points (video) and Berneung Topkingboxing had successfully defended his title against Thomas Carpenter on points, in a bout that saw Berneung cut and dropped by elbows from the rangy Thomas during the first half of the fight (video).

In the third bout, Saiseelek Sitsuperman gave away height (and possibly weight) against Marik from France and was sent crashing out by an elbow in round four (video).

As Tapaothong warmed up, I couldn’t fail to notice the Thai in the ring for bout number four against Ncedo Gomba, a South African from Tiger Muay Thai in Phuket. In the program, he was listed as Wichai Taamoi, though I’ve since learned that he is also a prisoner, going by the fight name of Tiger Or Boonchuay.

Wichai was confident to the point of cocky, performing a beautiful and elaborate “wai kru” dance that included moments of comedy when he acted out digging the grave of his opponent and staggering under the weight of his corpse.

He was quite the showman during the fight too, as you can see from the video filmed by Jonny Betts for the Tiger Muay Thai channel. Ncedo did well against a tricky and cheeky opponent, but the Thai comfortably took the points win at the end—the performer right up until leaving the ring—and seemed to enjoy every moment of the experience.

In the ensuing women’s bout, Sayfa Sor Suparat used her long legs to kick and score against Kwanjai Sor Por Lor Chaiyaphum, taking the 118lb WPMF title and the 100,000 baht side bet, which was unceremoniously shoved in her mouth by the referee after the belt had been strapped to her waist by boxing superstar Khaosai Galaxy.

Then it was Tapaothong’s turn to fight. His opponent was listed on the program as Wuttipong Korsantiya, and as he entered the ring I could see he was taller, slimmer and a few years younger than Tapaothong. 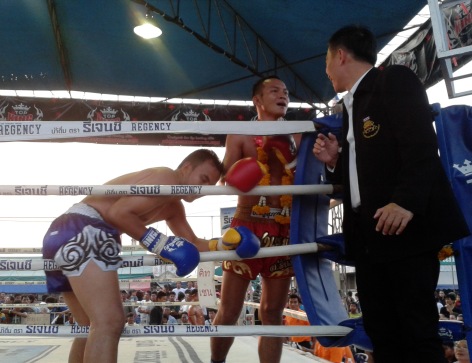 As the fight unfolded it became clear that Wuttipong has considerable ring experience and may well have been a relatively famous fighter before his incarceration. However, Tapaothong has lost none of his skills, and scored using a variety of techniques including a few strong elbows. By the end of round 3, though, he was clearly fatigued and looked pretty relieved when the final bell sounded. The bout was judged a draw—a fair decision, in my opinion.

Later, after some investigative research (i.e., a google search in Thai), I discovered that Wuttipong and Wichai have both beaten foreigners in Muay Thai events held in Khlong Prem prison. I hadn’t noticed at the time, but apparently the two boxers arrived at the venue in an armoured vehicle and were watched by guards throughout, presumably returned to their cells immediately after the show.

In this Fightland documentary on one of the Prison Fight events, you can see a brief interview with Wichai (in which he describes his confidence in his own training and fighting), as well as clips of him demonstrating that confident style of his in the ring against Stephen Meikle from Scotland.

It seems apt that the two prisoners were allowed to fight on a show arranged to celebrate the life of Nai Khanom Tom, who—according to folklore—fought for his freedom from a Burmese prison by defeating ten Burmese champions.

Allowing prisoners to compete in Muay Thai and boxing bouts is by no means a new concept, but has, in recent months, gained increased publicity through the Prison Fight series—a series of charity events organised in conjunction with the Department of Corrections. In the promotion, inmates compete in Muay Thai and boxing bouts against foreign opponents, with participants awarded for wins by having their sentences reduced. However, the Prison Fight organisers have received criticism from those who consider the show gimmicky and exploitative, disagreeing with convicts being rewarded for “violence”. (Read more on the subject in this post by Emma Thomas for Under the Ropes.)

I’m all for prisoners being encouraged to train Muay Thai and, for those with good behaviour, to be allowed to compete in events both in and out of jail. In my opinion, Muay Thai promotes discipline, not violence. While I appreciate that crimes and misdemeanours cannot go unpunished, Muay Thai can offer a form of rehabilitation to these inmates—giving them a purpose and goals to work towards rather than wasting away for years in a prison cell.

What’s your take on the issue?