Tomorrow (Sunday 28th July), Satanfaa Sagami (Eminent Air) will defend his 118lb Channel 7 title against Design Rachanon at Channel 7 Boxing Stadium, Bangkok. The fight will be their third meeting—their second for the belt—with Satanfaa controversially winning the last bout on a split decision. (Watch the fight using this link. NB May not be viewable outside Thailand.)

I was in the stadium on that occasion and though I am obviously more than a little biased towards my Eminent Air Boxing Gym/Sagami team mate Satanfaa, it was a close fight. The younger Design was stronger during the early rounds (particularly in the clinch), and by the end of round four was reported as ahead in the gambling odds. However, in round five, Satanfaa made a late surge, becoming the dominant fighter and throwing Design a number of times (which scores highly in Thailand). 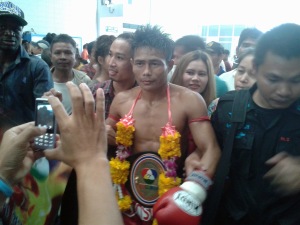 Satanfaa was announced the winner…..to jeers. Design’s supporters filled one side of Mor Chit’s stadium—eye-catching in their fluoro pink shirts—and loudly expressed their displeasure at the result. The situation was not helped by the announcer having originally announced one of the judge’s scores incorrectly, which could have seen Design crowned the winner. This blunder, I believe, served to increase the disappointment of Design’s fans and intensify their fury. Post-fight, the Rachanon camp lodged a complaint and, after an investigation, two of the judges were suspended for one or two months.

News of the judges’ suspensions did surprise me. In my opinion, the result was not outrageous. In Thailand I have seen many a fight in which a boxer trailed for four rounds but emerged the points victor after an emphatic round five. Over here, fights are rarely judged on a round by round basis, and it is well-known that the scoring is heavily weighted towards the closing rounds. Design may have been fresher during the initial half of the fight but it was Satanfaa who was in control at the end of the bout.

Muay Thai judging is subjective by nature, and therefore it is impossible to eliminate personal bias and to completely avoid future judging controversies. In his recent article on the decline of Muay Thai, Rob Cox described proposals that judges should be placed in sound-proof booths with limited views outside the ring to avoid influence from crowd noise or gestures. However, there remain too many other factors—for example, a fighter’s ethnicity/home city, the competing gyms, the colour of a fighter’s corner, personal fighting style preference, politics, money etc—that could potentially affect a person’s decision-making for Muay Thai judging ever to be considered a truly controlled process.

Tomorrow, it will be intriguing to see how the rematch between Satanfaa and Design pans out, though I hope my team mate will receive a fair reception in the stadium after reading some negative comments on social media. These keyboard critics should remember that Satanfaa was not responsible for the scoring debacle last month, and that he had as little control over the outcome as Design did that day.

The fight will be Satanfaa’s sixth defence of the title he won on Christmas Day 2011 against Wangjannoi Sit-u-ubon, having seen off previous challenges from Petchmoraktot Tided 99, Chokpreecha Gar Sagunchuea, Saengeng Gilasport, and Sorntong Sor Yingjaroenganchang. Psychologically, this rematch will be a real test for him, but I’ve seen him pull through some tough battles and am confident he will not disappoint on the day.

Tune into Channel 7 from 13.45 on Sunday for coverage of the event. In the meantime, enjoy a short clip that features Satanfaa (wearing blue shorts) training one morning last week.

A Night at Jitmuangnon Stadium »
« Interview by Kevin S. Cummings for Thailand Footprint