My last face-to-face meeting with Theresa Carter was in the ring.

It was the WMPF King’s Birthday promotion at Sanam Luang, Bangkok, 2009, and Theresa—already the WPMF 130lb title holder—was challenging me for my WPMF 126lb title. Theresa was the better fighter on the night—winning on points after the five rounds of competition by unanimous decision.

Theresa and I fighting for the WPMF 126lb title, King’s Birthday, 2009. Photo by Rob Cox

Sadly, Theresa then suffered the devastating loss of her former partner and trainer Lee Blackman, and was understandably absent from the Muay Thai circuit for some time.

However, I was pleased to see her make a triumphant return earlier this month; winning her third world title—at a third weight (WPMF 122lb)—after defeating Thailand’s Ploymuangjan Lookpetdam on a live televised show on the King’s Birthday in Bangkok.

Theresa kindly took the time to answer a few questions on the matchmaking for her most recent bout, as well as her beginnings and achievements in Muay Thai, experiences in Thailand, and how she handles combining her work and training schedules in her home city of Perth, Australia.

How many years have you been training in Muay Thai and what prompted you to take up the sport? How many fights have you had in total?

I have been training in Muay Thai on and off for 12 years. I originally took up Muay Thai when I was living a very unhealthy university lifestyle and had managed to gain a good 10kg since leaving high school. I trained for four years before my first fight in 2004 and lost 10kg for that fight. I’ve now recently had my 25th fight.

You are now a world title holder in three different weight categories (WPMF 122lb, 126lb, 130lb), which is an amazing achievement. What other titles have you won?

In addition to the three world titles, I have two state titles, two Australian titles (one WBC), and a commonwealth title. I also competed in the WMF World Amateur Championships in 2006 and 2007 and won silver medal at both events.

Could you please explain what happened regarding the matchmaking for your most recent fight? At the press conference you were billed as fighting Sawsing Sor Sopit for the WPMF 126lb title but ended up contesting the WPMF 122lb title against Ploymuangjan Lookpetdam on the night.

I wish I could explain but to be honest I’m still not 100% sure myself. It came as a shock to myself and my fellow training partner Kate Heuston at the weigh in when it was announced that they had switched our opponents. Kate and I were both matched at 57kg against Thai opponents. I weighed in at 55kg and the decision was made by the WPMF committee to change our opponents and as no one speaks great English we were never informed why. All the changes at the weigh in made the lead up to the fight mentally challenging. My opponent Ploymuangjan Lookpetdam arrived late to the weigh in, so the first time I saw my opponent was when I stepped into the ring. I would still love the opportunity to fight Sawsing Sor Sopit if it arises in the future as I was looking forward to this bout.

Theresa after her most recent title win, pictured with her current trainer
Olay Sakonpetch (right)

In Thailand you train at Saengmorakot gym, which is home to several of Thailand’s top stadium fighters, including Petchasawin Seatransferry, Pinsiam Sor Amnuaysirichok, Jingreethong Seatransferry etc. How is it as a woman training in such an environment?

Training at Saengmorakot amongst champion fighters is always inspiring, motivating and at the same time humbling. I love that the boys live a very simple life but they’re always happy and joking around. Training with the boys is fun, challenging and rewarding. My training has definitely evolved since I started training there around five years ago. Saengmorakot was a very traditional gym back then—I was never allowed in the ring or allowed to grapple with the boys. Perseverance and hard training at the gym has paid off. I am now allowed to train in the ring and do the same training as the Thais including the clinching at the end.

How would you compare the training you get in Australia to the training at Saengmorakot? What are the major differences and similarities?

The major difference that training in Thailand offers me is an environment free of the distractions and external stressors of everyday life at home. I am able to train twice a day and eat and sleep well. I can usually only train in Thailand for short stints of 2-3 weeks due to work allowances, but even in this timeframe I can see changes in my body composition. Another aspect of training at Saengmorakot that you don’t get from training at home is the coaching from several locals who rock down to training to make sure you’re doing your rounds. They’re always offering their advice and giving you motivation. It’s a good atmosphere to train in and there are always lots of laughs. At home I train once a day and we aim to get as much in a 2-hour session as we can. I try to do my own strength training sessions twice a week outside of Muay Thai training.

What is your “day job” and how do you find combining your work and training schedules?

I work as a Clinical Nurse in a Burns Unit. I work night shift by choice as this allows me to work set shifts and create more of a routine with my training. I generally have the start of the week off and train harder at the start of the week. I do go to training before working a 10-hour night shift but I try to make these sessions lighter. I’ve recently completed an external course in personal training and next year I aim to ease out of nursing and move into PT which I’m very excited about.

If you had to pick one standout bout from your fight career which would you choose and why?

At each stage of my fight career I’ve had fights which I’m proud of. My main goal is to fight the way my trainer wants me to. I don’t believe Muay Thai is an individual sport—it’s a team effort and your pad holder works hard with you to get you ready for your fights. My trainer Olay Sakonpetch is very honest and a bit of a perfectionist, which are good qualities to have in a trainer. You’ll usually hear him say, “good fight, but…..” So I still believe my standout fight is yet to come!

Photo by Elite Image and Motion

If you could have one dream fight with anyone (active or retired) who would you choose as your opponent and why?

I still feel like I’m just getting back into the fight scene really after having a couple of years off and just starting back this year. There are some very talented fighters in Australia and in 2013 I’d like to fight some of the girls in Australia competing between 55-57kg and I’m hoping for a rematch with Nicole Brolan when she works her way back to 57kg. After that I’ll be setting my sights on international fighters but there’s no dream bout that stands out for me. 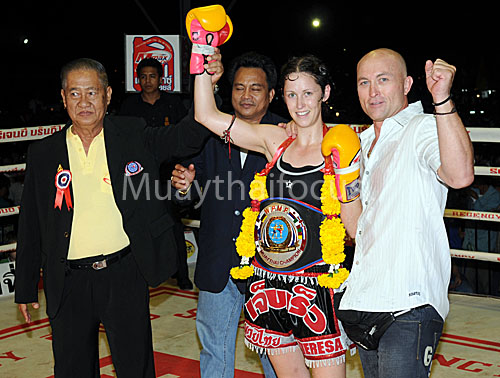 I was really sorry to hear about the passing of your former partner and trainer Lee Blackman. I was lucky to have met him on a few occasions and he seemed a truly genuine, warm guy with such heart and enthusiasm for Muay Thai. Could you describe his influence on your Muay Thai career?

If someone had approached me 10 years ago and told me I’d be a world champion in Muay Thai one day, I would have laughed. I was living an unhealthy lifestyle and used training as a way to have fun and exercise at the same time. Lee and I trained at the same gym and became great friends. I can still remember standing at a fight show and watching one of the girls I used to train with fight and Lee said to me, “You could fight you know and you’d be good at it”.

Two years later we started dating and with his support I lost 10kg and had my first fight. In 2005 Lee started his own gym and under his guidance I have won state, Australian and world titles.

Lee was a selfless, passionate and honest man. These qualities were so great in a trainer and his club Cannington Kickboxing and Martial Arts Centre represented that. He would give 100% to his students and many of the senior students at the club had become like family and the gym was always a great place to be. He helped people believe in themselves and all the guys/girls that I used to train with have been searching for a gym that holds the same atmosphere ever since and it’s impossible to recreate. He was so good at it!

I’ll never forget not just the skills in Muay Thai but the life skills he taught me to dream big and work hard at achieving my goals. His support helped me to stay focused, to overcome fears and see a different side of life. I’ll be forever grateful for having known Lee and not a day goes by where I don’t think about him.

“Dream big” is an inspiring epitaph and one that will no doubt forever be etched on Theresa’s memory. To have won world titles at three weights is a remarkable achievement, and one that few boxers can lay claim to. What will be next on Theresa’s list of accomplishments? Considering the strength and determination she has already shown during her Muay Thai career, the sky’s the limit.